What are our goals and how do we archive them?

Limitations of the automation

The automated system can't protect against an attacker that controls the initial key exchange and persistently re-encrypts all messages with keys controlled by the attacker. This would be detectable if one message gets through and using a WKD would make this attack more expensive but until a User has manually exchanged / checked the fingerprint with his intended communication partner the User can't be sure if the communication is really secure.

This system still caters to users who need that level of assurance (see Level 3 / 4 below) and it can be argued that the costs and detectability of such an attack would likely be higher then other attacks on the users system such an attacker may be capable of.

userid: The userid on a key that matches the smtp Address of the sender.

tofu: Information we have about the communication history and reflects a bit the API of gpgme_tofu_info_t. As tofu info is bound to a given key + userid it is also sometimes called "binding".

key source: The source where the key was imported from, e.g. if if was automatically imported over https, or if it comes from public keyservers.

With trust-model tofu+pgp this level is used only for Keys that were never used before to verify a signature and not obtained by a source that gives some indication that this is an actual key for this address.

The Key should not be used for opportunistic encryption to avoid the problem that the recipient might not be able to decrypt the message because it is a wrong or outdated key.

This level means that there is some confidence that the recipient actually can use the key as we have seen at least one signature or we have a weak trust path over the web of trust.

So it is unlikely that the recipient can't decrypt and thus its ok to use that Key for opportunistic encryption encryption but when receiving a signed message it should only show in details that a message was signed.

There may be some indication that the sender demonstrated a willingness to use crypto mails, especially if opportunistic encryption is disabled.

The "automated user" that never uses any Certificate Manager or GnuPG will only see Level one and Level two as this is the highest level reachable through full automation.

We have basic confidence that the Sender is who he claims because we either have an established communication history or some "good enough" source of the key (e.g. the mail provider + https) provided the key for this sender.

Conflicts in this level are discussed more details below in the part about Conflict handling.

Level 2 is good enough for most use cases, but some organizations or individuals or policies may require and assurance of confidentiality that may never reached through automation.

The idea is that Level 3-4 provide flexibility for Organizational Measures like: You may only send restricted documents to Level 4 keys.

The level is reached either through Web of Trust or if a user explicitly set the tofu Policy to "Good" for this key.

Automatically this Level can only be also be reached through WoT if a user trusted at least one other key.

This is also the level for S/MIME Mails.

Same reason as for Level 3. But even more restricted to direct trust, meaning that:

Either yourself or someone that is allowed to make that e.g. your central "CA" style person you may have in an organization has signed that key.

For a user this could also mean something like "with this communication partner I want to be absolutely sure that I'm always using the right key. So I manually verify the fingerprint. And mark that with a local or public signature on that key.

A time delay is supposed to make it more expensive for an attacker to reach level 2 as we then start to make claims about the attacker.

The assumption is that an attack that is kept up over some time is more difficult. Especially if it involves some external factors, like a phishing website etc. which might be turned off.

A time delay gives others the chance to intervene if they detect an attack e.g. if it is against a whole organization.

It also mitigates User Experience problems arising from the use of the encryption count in GnuPG's calculation for basic history because if you encrypt 20 drafts or 20 mails / files quickly to the same key it should not become level 2 before you have seen a signature.

A concern is that using the time of the first signature verification before reaching level 2 make lead to bad user experience. E.g.: You look at the same message after three days. Now it's level 2, last time you looked it was level 1.

HTTPS Trust as shortcut to level 2

Using HTTPS for key discovery will automatically bring a key to level 2 because in that case we have a claim by some authenticated source that this key really belongs to the according mail address.

If an attacker controls your HTTPS there are very likely cheaper and less detectable attacks on your communication then intercepting pgp encryption. e.g. compromising your system.

It's also harder to break HTTPS compared to SMTPS/IMAPS because every MUA offers to ignore certificate errors (which dirmngr does not) and a compromised router could claim that your MSP only offers SMTP / IMAP without encryption.

There should only be prominent information when reading a signed mail if:

This could be displayed as a checker or a seal ribbon or something. It should be prominent and next to the signed content. There should be a distinction between Levels two, three and four but it may be slight.

Especially: ignore GPGME's Red suggestion An attacker would have removed the signature instead of invalidating it. It should be treated like an unsigned mail and only additional info in details should be shown for diagnostic purposes. Similarly when Red is set because a key is expired or so. It's not more negative then a unsigned mail so only if your MUA shows unsigned mails as "Red" may you treat signed mails this way, too ;-)

What happens when there is a conflict in the tofu trust model, so you have seen two keys for a senders mailbox and the keys are not cross-signed and both are valid.

Both misuse cases should be handled on the senders side because he controls or lost control of the involved keys and can take steps / inform himself what went wrong.

Case two very likely more common as case one would also lead to problems already because the communication partners of the second key would not know to which key they should encrypt the user would be able to read mails on one device but not at the other et. cetra.

Loosing keys can also be assisted by software that provides a bad user experience or does not follow common practices.

Similarly, if a signature is verified by a MUA and there are secret keys available with the same userid and they are not cross signed this should be told to the user and offered to do if possible.

Recipient means here that if there are two keys seen for one sender address when verifying a mail, the recipient is the person doing the verification.

A conflict should then be automatically resolved by keeping the old key in use for automated encryption to this address until it is revoked or explicitly marked as bad and treating both keys as not "Green". In the Level system this will mean level 0 for the new key and level 1 for the old key.

The conflict would be detectable in the interface because it will no longer be shown that the sender is verified. A details dialog should provide a clear and easy option to switch keys for this recipient or mark the old key as explicitly good.

If a key has trust through the pgp model (Level 3 or higher) it should be kept at that level to further mitigate the "troll" attack.

But even if the new key is provided in the web key directory it should not be automatically switched over, because in that case we would have two good keys and something is wrong. If a user has lost control / lost his old key and is unable to revoke it we want to create problems sender, so we get notified by the sender that the new key should be used and we can mark the old key explicitly as bad.

Does this model protect against our threats?

a) When a Mail gets trough once e.g. if Mallory controls Alice's router and Alice uses an Internet Cafe once. In that case Bob would not be able to decrypt the message. That communication failure could lead to more investigation. A MUA may assist that by showing to which keys a mail was encrypted in case decryption fails.

b) If Alice publishes her key in a Web key directory Bob's MUA can detect that the key used for Alice does not match the one he always used and can signal this by not showing Alice's signatures as "Good" indicating that the communication is not protected.

The Attack is more problematic if Alice and Bob don't encrypt but just sign. In case a) this would mean that the mails that get through from the real Alice would not be shown as valid. But once a mail gets through from the real Alice the messages from both Alice and Mallory will not be shown as valid anymore, indicating that the communication is not secure.

This attack will be prevented by keeping the established key in use so messages won't get encrypted to Mallory. By not showing the validity indication anymore this attack is also detectable. 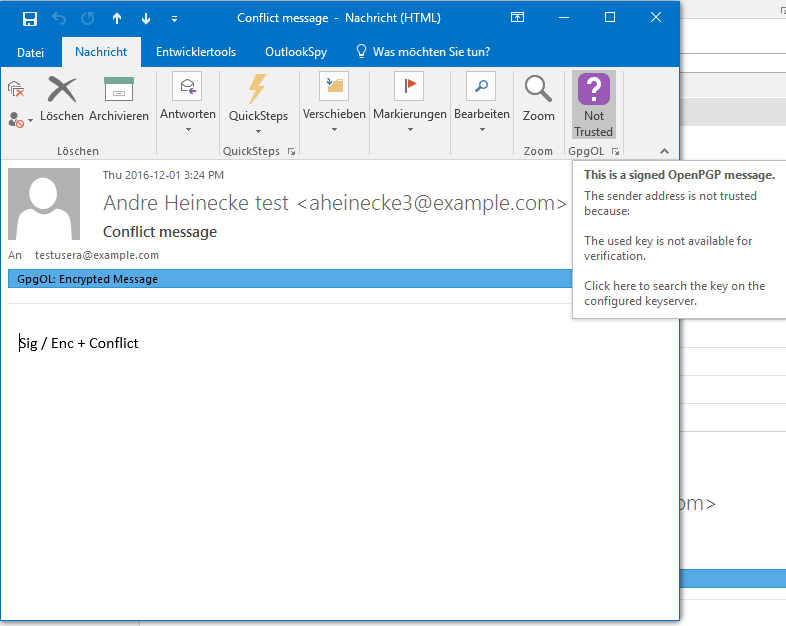 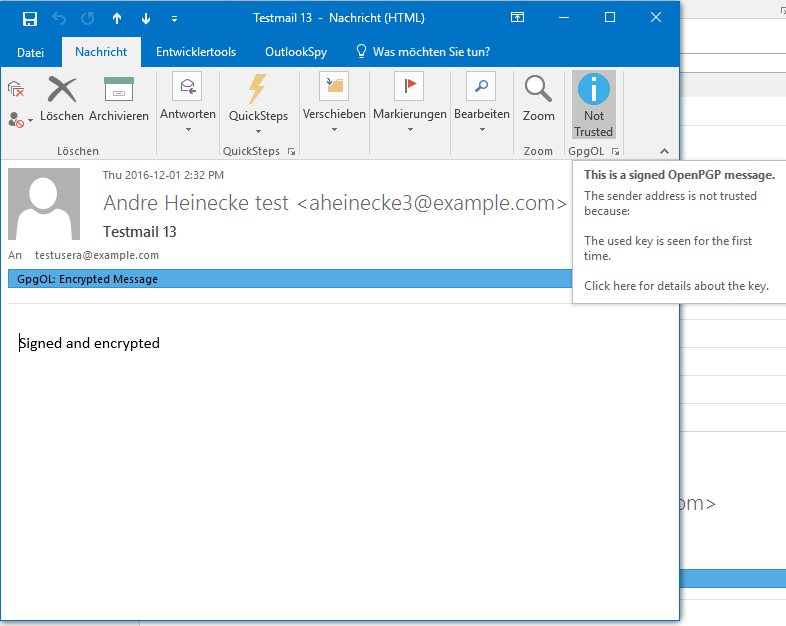 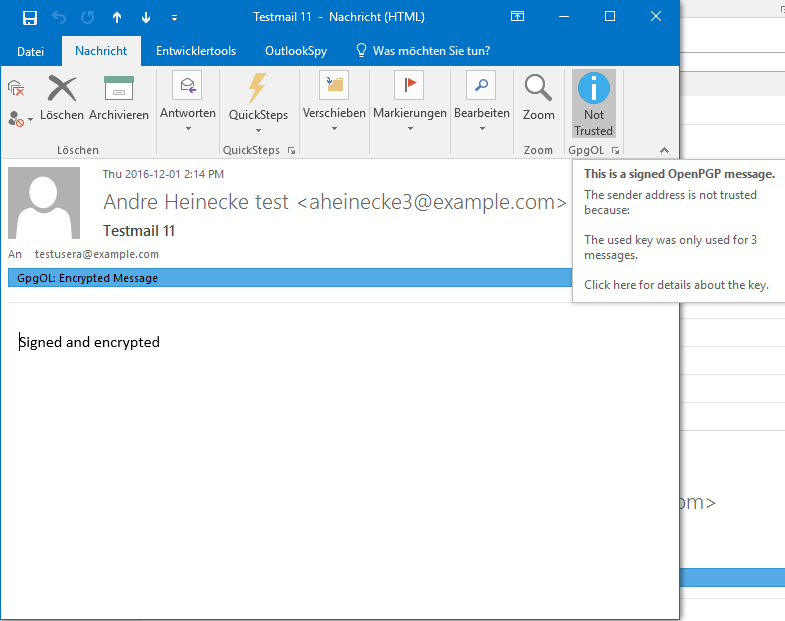 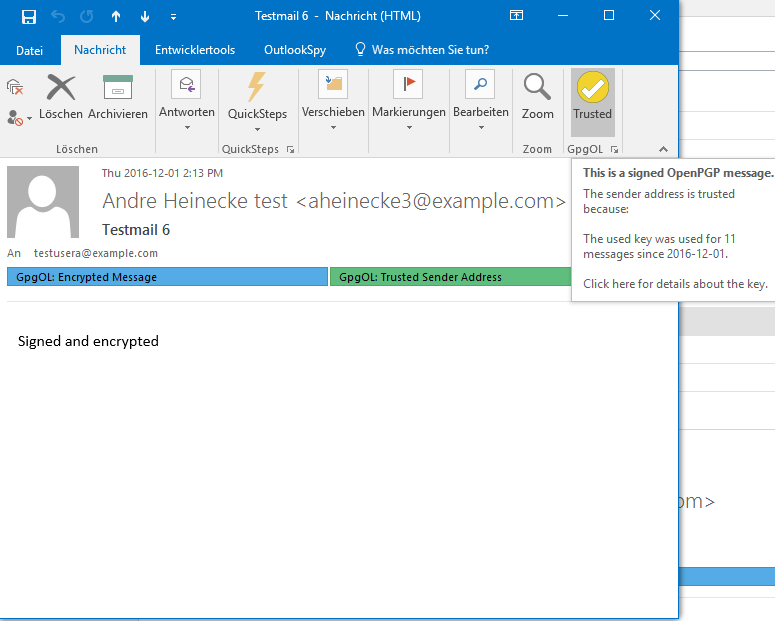 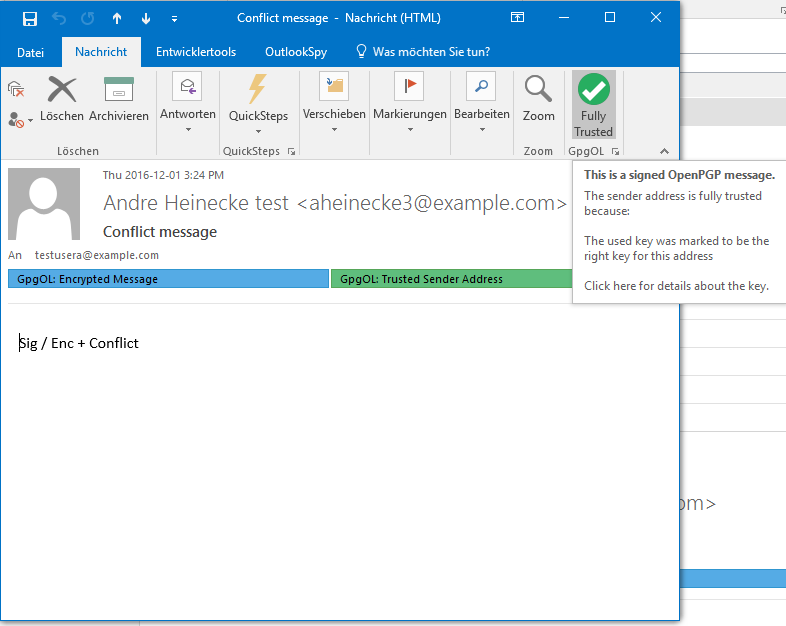 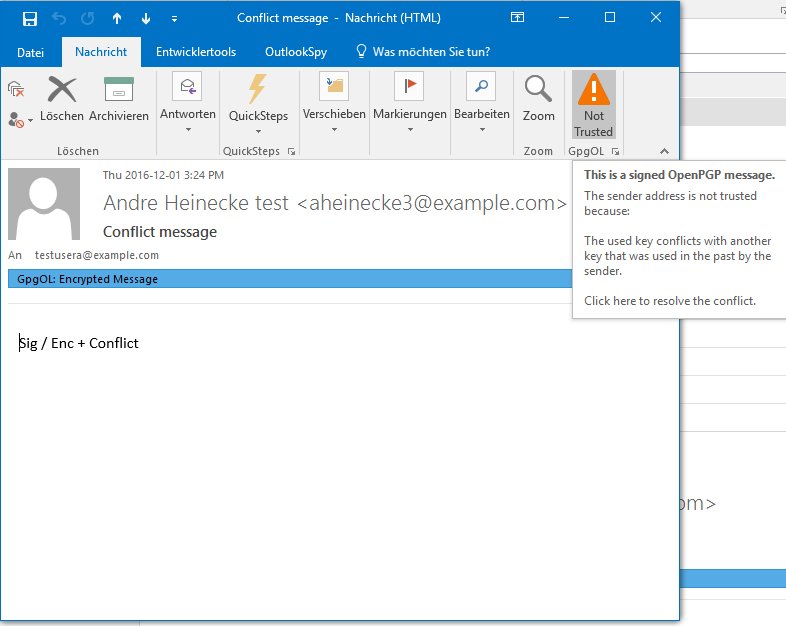